Forget the Fear of Clowns…

Forget the Fear of Clowns… 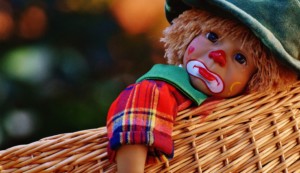 When I was about 3 or 4 years old I remember going to a circus.  A clown had given me a long big red balloon.  I remembered that balloon being almost as big as me, which is relative to a toddler.  As my family and I exited the building in which the circus had wrapped up, I clutched my beautiful red balloon like a prized teddy bear.  Before I got a chance to get to the car my beloved balloon burst in my arms!  When it popped the balloon was nestled next to my little left ear.  The burst balloon hurt my ear, my cheek and my little heart.  The tears quickly followed and I was never the same since.

Once I worked in a “cubicle city” where the co-workers would celebrate birthdays by decorating the honoree’s cubicle with dozens of rubber balloons.  I made sure to explicitly request to have just streamers on my cubicle for my birthday.  My fear of balloons became difficult to disguise once I had children of my own.  How silly would it be to have a mother who despised balloons!  I can’t fear balloons; I’m supposed to be a role model to my sons.

I discovered hypnosis could help with my fear of balloons.

I could finally go to a child’s birthday party without cringing or frequently escaping to the bathroom to avoid balloons.  As a part of the process of getting over my fear I had to face the balloons while in a hypnotic trance.  The process of addressing fears in hypnosis is a form of progressive desensitization.  This means I was asked to imagine different balloon related scenarios and rate my fear/anxiety levels.  I started with a mellow scenario and worked my way up to more intense ones, like imagining being in a room filled top to bottom with balloons.  The more I worked through the fear while in hypnosis the easier it became to confront it.  While my personal experience worked simply and with a few sessions not everyone’s fears are the same.  The type of fear and how afraid you are of something contributes to the amount of time and sessions it would take.

I can say with confidence that, thanks to hypnosis/hypnotherapy, I don’t run the other direction when I see a big fat balloon!  I might plug my ears if the balloon is threatening to pop.

What’s getting in the way of you living life?  Do you have fears you’d love to conquer?

Give me a call for a free consultation!